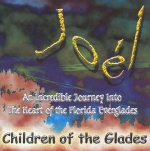 Joel
Children of the Glades

Children of the Glades

4. Children of the Glades

I was born in Allentown, PA on June 12th in the year of 1961, into a very artistic family.
My mother, father, and grandmother were my greatest inspirations.  For 9 years, I studied voice with an emphasis on opera under the guise of the legendary Hazel Heffner Bachina.  In 1979 I appeared in The national addition of Who's Who in Music receiving a gold medal for voice for best male opera in the state of PA., and a silver medal for 3rd in the nation.

From 1981 to 1994 I satisfied my urge for the stage by auditioning and performing in many plays and musicals such as: Jesus Christ Superstar, Godspell, Hello Dolly, Cats, Hello Again, South Pacific, Dracula, West Side Story, Torch Song Trilogy, Jeffrey, The Runaways, The Passion, and many more. I have also directed The Dining Room, Jesus Christ Superstar, Godspell, and more. I am an accomplished Latin Percussionist, I also play Pan Flute, Indian Flute and I Sequence.

My music is influenced by natural sounds and rhythm of nature. It is soulful and interpretive of the spirit of mother earth.

I truly hope that my music inspires you and takes you to places of myth and mystery, relaxation and bliss.

It is my belief that music will lead the world to peace. Peace to all.